The Best You Best Me team returned to McDowell County with ProJet Aviation to distribute a truck full of food, clothes, and supplies on June 11. Thanks to AVS Audio and Video, Recycle Life, and all the donors, volunteers, Father Tony and the wonderful folks in McDowell county who made the trip a success. Learn more on how you can help. 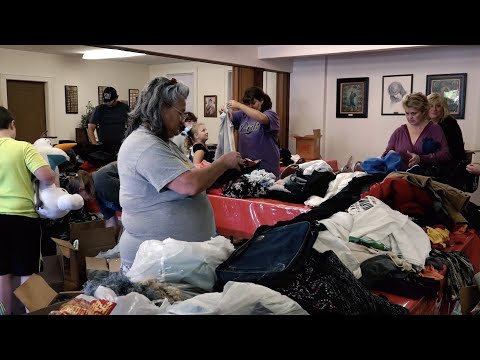 After discovering McDowell County, Richard knew that he wanted to continue helping the people from Welch in West Virginia. The first food and supplies drive was such a great success, that he didn’t want to wait too long before doing the next one. During a Best You Best Me meeting with Julie O’Brien from ProJet Aviation they decided to do another food and necessities drive. They set the date for this food drive on June 11th, 2019.

Even though the first food drive was a huge success, Richard had the feeling that with a better organization they could help even more people. Julie O’Brien suggested working together with Shye Gilad from Project Aviation. Richard thought that this was a great idea and thus joined Shye the new BYBM project. Together, the three of them were able to collect a truckload of clothing and supplies. Paramount Business Jets provided the funding to purchase food in the local supermarket. Together with the people from the church, Richard, Julie and Shye organized the 2nd food drive for McDowell County on the 11th of June.

A few days prior to the event, Father Tony hung a banner in front of the church to inform the people from Welch about the food drive. He wrote “Free Food + Clothes June 11 at 10 am”. On the 11th, Richard rented a van and filled it with food and other necessities from the supermarket. Below you can see a picture of the van completely filled till the top with food for the people from McDowell County. Afterwards, he met with Julie and a few other aviators at the church where Father Tony works. They set up tables with all the food, supplies, clothes, diapers, pots and pans and all other necessities. Everyone worked extremely hard which was a great sight. Their hard work paid off, because the event was a huge success. Over 80 families came to the event and were thankful for everything that the entire Best You Best Me team did for them. The Best You Best Me staff was overjoyed from the success of this project and were certain that this wouldn’t be their last initiative to help the people from McDowell County.

The project couldn’t have been done without Leesburg Executive Airport leadership, ProJet Aviation, AVS Audio and Video, Recycle Life, all the donors, volunteers and staff at church in Welch.BYBM gives a big shout out to everyone who was a part of this event!