Richard Zaher goes to DC to find some homeless people, talk to them, learn more about them, and to help them with some money. 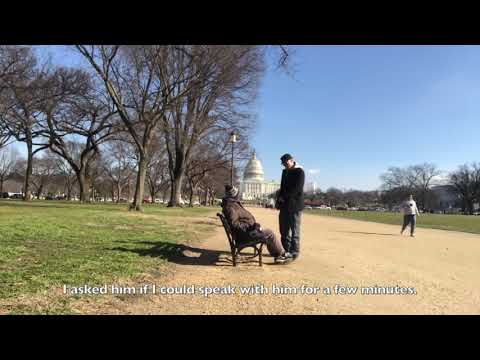 January 2019 was a cold month. Richard Zaher was outside and felt the chills coming through his coat. This made him wonder about all the homeless people, and how they deal with the cold winter months. Being close to Washington DC, Richard decided that he wanted to help. He would look for homeless people and see how he could improve their day, even if just for a little bit.

After driving for about an hour, Richard stopped at an ATM machine in Washington DC to pull out cash to help the needy. He then continued his journey on foot. During his walk, he passed Union Station and found a nice looking park right next to it. He entered the park and noticed that the grass was still wet from the rain. The next thing he saw was a homeless man sleeping on the wet grass. Richard walked over to the homeless man and asked if he was alright.

The homeless man pulled away what seemed to be something he used as covers and responded irritably to Richard’s question. Richard looked at the man and could see from the weary look in his eyes, that the man was leading a tough life full of struggles. Richard repeated his question which resulted in the same irritated response “what.. no”. The man probably thought that Richard wanted him to leave the park or say something unpleasant to him. Nothing was less true. Richard pulled out his wallet and offered the homeless man 100 dollars. The man was shocked to see this amount of money but he accepted it with a lot of gratitude. After accepting the money, Richard asked if he could say a prayer for the man. The homeless man accepted that as well.

Richard continued his quest to help the homeless in Washington DC. It brought him to another homeless man that was sitting on a bench and enjoying the sun. Richard asked the man if he could join him on the bench and ask him a couple of questions. The homeless man replied with a short “sure”.

After a pleasant conversation, Richard asked if he could offer the man money to help him get through these cold days. The man nodded. Richard took out a 100 dollar bill and handed it over to the homeless man. The man took the bill with great delight and said “Thank you God, not even Santa was this nice to me this year!”. He told Richard that he would go out and buy food for him and his friends at the homeless shelter. Richard shook the man’s hand and that is where they parted ways.

While walking back to his car, Richard hoped that his help made the lives of these two gentlemen a little better.